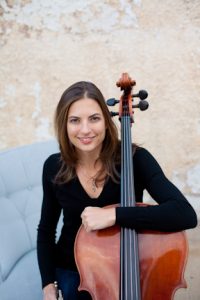 Beth Rosbach is a classically trained cellist who happens to be a rock n’ roller at heart. She first pursued her cello studies at the University of Oklahoma, graduating summa cum laude in 2001 and then the University of Colorado, completing a Masters Degree in Cello Performance in 2004. She now teaches privately and freelances throughout Colorado, and is a member of the Otis Taylor Band. From 2011-2016 she was the founder and Executive Director of Sphere Ensemble, a large string ensemble noted as a rising force in Colorado’s classical music scene. She also performs regularly with Denver-based indie-rock band Covenhoven and numerous side projects throughout the Denver metro area. Praised for her adaptive yet virtuosic playing, Ms. Rosbach has performed chamber recitals across the United States and in Europe. She has appeared on stage with musicians as diverse as cellist Lynn Harrell to renown pop and electronic musician Moby, to violin virtuoso and world musician Kailin Yong. Along with her passion for performing, Ms. Rosbach has an interest in the prevention and treatment of performance-related injuries in musicians, advocating therapeutic studies such as the Alexander Technique. She lives in Lafayette with her cat, Monarch, and her four cellos, Biff, Tank, Lars, and one that she hasn’t named yet.

Some more about me:

Why and how did I become a professional cellist?
I didn’t plan on making a living playing the cello. When I was a kid, I was mostly interested in subjects related to animals, like zoology and entomology (insects). I enjoyed playing the cello and particularly playing in various orchestras, but was always set on doing something science related. I started my undergraduate studies as a biochemistry major, with plans to go into genetic research. At some point during that first year of college, I realized that I hated chemistry and lab work! I was already getting a minor in music, so I switched majors to cello performance, and haven’t looked back since.

What do I do as a professional musician?
There are primarily two things one can do as a musician: perform and teach. I’m fortunate enough to enjoy doing both of these very much. I teach private lessons to students ages 7-70, and from beginner to advanced. I also play in professional orchestras and with various local bands. During the summer I perform for weddings and receptions, either as a soloist or with a small group of 2-5 musicians. On a typical day you’ll find me practicing (anywhere from 1-4 hours) and teaching lessons.

What else do I like to do?
I have an interest in preventing and treating performance-caused injuries suffered by musicians, and 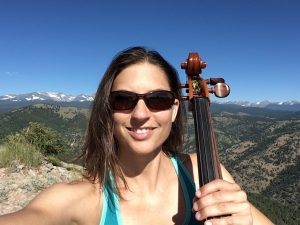 have tailored my teaching to address those issues. I enjoy trail running and road biking, and am a passable skier!